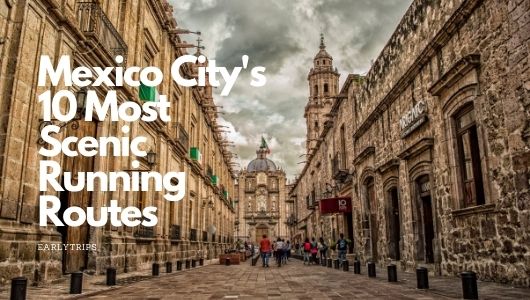 Mexico City provides something for everyone, including the most ardent runner. Although it has a bad reputation for pollution, Mexico City has abundant of parks and plazas that are ideal for a jog. It’s crucial for runners to understand that Mexico City is 2,250 metres above sea level, and that the altitude can have an impact on their endurance. Pollution has decreased in recent years, but pollution is still a factor to consider for runners. There’s no reason you can’t enjoy Mexico City’s many gorgeous running trails.

Here are some suggestions for places to run during your visit to Mexico City:

Parque Alameda, located in the heart of Mexico City, is a beautiful urban park with a long and strange history. Nowadays, though, the criss-crossing walkways make it a great site for a short jog if you’d rather stay in the heart of the capital and soak up all of its ambiance. Weekends are typically busier, with families and travellers taking use of their surroundings, so if you want to run, go during the week.

Mexico Municipal’s Chapultepec Forest is the largest city park in the Western Hemisphere and is known as the city’s lungs. The park, which is centred on a rock formation known as Chapultepec Hill, offers a large amount of recreational space as well as several monuments, historic sites, and cultural institutions.

Start your run at the Auditorio Metro Station and go down Paseo de la Reforma before turning right onto Av. Grutas to enter the park. As you go through the park, take in the mature gardens with enormous trees as well as the monuments. Cross Paseo de la Reforma and make a loop around the Rufino Tamayo Museum. You will reach the Paseo de la Reforma after passing the Museo Nacional de Antropologia and will be able to return to the beginning.

The most startling aspect of living in the Western Hemisphere’s greatest megacity is how easy it is to feel like you’re in the middle of nowhere with a little effort. You don’t even need to leave CDMX’s city limits. The Parque de los Dinamos serves as an excellent example of this.

There are four “dinamos” in the park; I recommend going all the way to the end of the park road and starting with the fourth dinamo. You’ll run through lush alpine forest beside waterfalls, rivers, and spectacular rock formations on extremely steep slopes. If you make it to the top of the peaks in this park, you’ll be rewarded with spectacular views of the surrounding area.

The Coyoacán neighbourhood of Mexico City has long been a favourite of runners from all over the world because of its gorgeous streets and spacious parks, which are excellent for a relaxed jog. While the 1.4 mile loop around picturesque Viveros Coyoacán is easy to appreciate, we encourage venturing out into the streets to get a true sense of this bohemian district. Consider including the Jardn Centenario in your itinerary.

There are three main running courses at the Autódromo Hermanos Rodrguez in Ciudad Deportiva Magdalena Mixhuca.

A gravel track, similar to those found elsewhere in the city, runs on the inside of the racecourse’s main eastern half, a second dirt track runs around the outside of the racetrack’s eastern portion, and the racetrack itself is a popular asphalt path for runners, rollerbladers, and cyclists.

The calm Bosque de Aragón can be found a bit further out, near the Mexico City airport. This park features two well-marked jogging paths, one of which is a longer, more rugged dirt road that circles the park’s edge, while the other is a paved, shorter route with a beautiful fountain in the middle. In either case, getting to this beautiful jogging spot couldn’t be easier: either drive or take the metro to the Bosque de Aragón station.

If you prefer a more urban setting for your running routes, Mexico City’s historic downtown is probably the best option. Because of the well-designed grid style, planning and sticking to a route is a breeze, and you’re unlikely to get lost. You can also take in the sights and sounds of the capital, such as the Palacio Nacional and the Bellas Artes building. It goes without saying that this trip should only be attempted early in the morning when the streets are less congested.

If getting up early for a run around Mexico City’s historic centre doesn’t appeal, you may always go to the San ngel neighbourhood, which is located further south in the city. Take the metro to Miguel ngel metro station and begin your run there, travelling north before turning onto Arenal in the direction of Jardn de la Bombilla. If at all feasible, make your way to the Plaza San ngel, passing by the lovely monastery.

The Bosque de Tlalpan is a known jogging refuge inside the Mexico City metropolitan region, with numerous distinct running tracks to select from. In fact, you’re bound to find one that suits you among the five options, however many people like Track 4. It’s a 4-kilometer circuit that takes you to some of the park’s best sights and sounds, including the zoo. It’s a great place to run, but it closes at 5 p.m. every day.

Canal Cuemanco is a great place to run if you want a scenic run with some history. A paved road follows the path of the canal, which was the site of the 1968 Olympic rowing contest in Mexico City. Furthermore, the views of Mexico’s twin volcanoes, Popo and Itza, as well as the famed Xochimilco trajineras and canals, make this a must-do 5-kilometer circular route in Mexico City.

You must run through the beautiful Nevado de Toluca if you want a genuinely jaw-dropping vista of the surrounding cities and valleys. While you’ll be adding altitude (and hence difficulty) to your training, the relatively flat surface provided by Mexico’s fourth tallest peak makes the trip and effort well worth it. Despite the fact that it is technically in Mexico State, the beauty of the setting and ease of access earn it a place on our list.