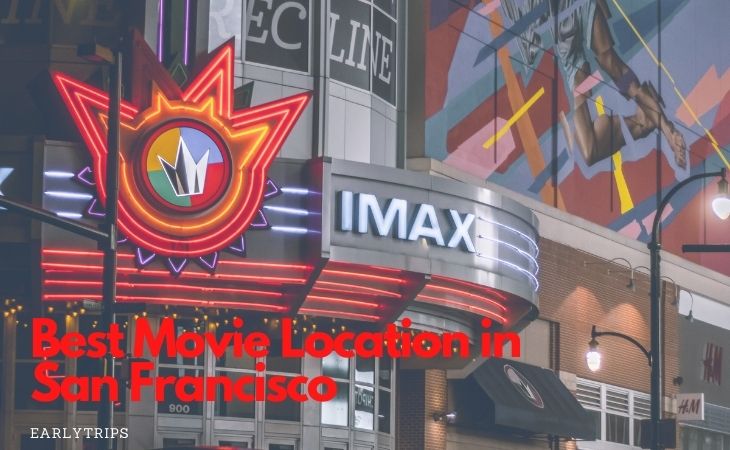 San Francisco is known for its iconic monuments and gorgeous neighborhood.  It has a rich and colourful film history that will make even the most ardent cinephile happy. The city of San Francisco has been featured in a number of films and here are the top 10 movie locations in San Francisco.

The bridge connects San Francisco, California, and Marin County, California, in the United States. The American Society of Civil Engineers has named the golden bridge one of the modern world’s wonders.

With a primary span of 4,200 feet and a total height of 746 feet when it opened in 1937, it was the world’s longest and highest suspension bridge at the time.

The Golden Gate Bridge has been destroyed numerous times in various disaster films like Star Trek Into Darkness, Pacific Rim, Godzilla, San Andreas, Planet of the Apes, and it ranks high on the list of massive devastation movie tropes.

Alcatraz Island is a small island in San Francisco Bay, about 1.25 miles off the coast of San Francisco, California. A lighthouse, a military fortification, a military prison, and a federal prison were all built on the small island. The island’s strong currents and chilly sea temperatures made escape nearly impossible.

The National Park Service now manages the island’s facilities as part of the Golden Gate National Recreation Area. Pier 33 is about 15 minutes away by ferry from the island. Hornblower Cruises, doing business as Alcatraz Cruises, is the official ferry company that transports visitors to and from the island.

The oldest working lighthouse on the West Coast of the United States is located on Alcatraz Island, which is home to an abandoned federal prison. It also has natural elements such as rock pools and a seabird colony. Escape from Alcatraz, The Rock, and other crime and suspense films have been inspired by the historic landmark.

San Francisco City Hall is the seat of government for the San Francisco City and County. It is a Beaux-Arts monument to the City Beautiful movement, which exemplified the high-minded American Renaissance of the 1880s through 1917, and was reopened in 1915 in its open space area in the city’s Civic Center.

Arthur Brown, Jr., of Bakewell & Brown, was the project’s lead architect, and his attention to detail extended to the doorknobs and the typeface to be used in signs. The San Francisco City Hall appears in all five Dirty Harry (1971–1988) films featuring Clint Eastwood.

In San Francisco, California, Potrero Hill is a residential neighbourhood. It is recognised for its views of the San Francisco Bay and city skyline, accessibility to many tourist attractions, sunny weather, and the fact that it is served by two freeways and a Caltrain station.

It was a working-class neighbourhood until gentrification in the 1990s, and now it is largely populated by upper-income people. In San Francisco’s Potrero Hill neighbourhood, parts of the legendary automobile chase in Bullitt (1968) were shot. Pacific Heights, a John Schlesinger drama thriller, was shot there most recently (1990).

Painted ladies are Victorian and Edwardian houses and buildings that have been repainted in three or more colours to enrich or enhance their architectural aspects, beginning in the 1960s. In their 1978 book Painted Ladies: San Francisco’s Resplendent Victorians, authors Elizabeth Pomada and Michael Larsen coined the name for San Francisco Victorian homes. Despite the fact that polychrome ornamentation was popular throughout the Victorian era, the colours employed on these homes are not historically accurate.

Between 1987 and 1995, the family sitcom Full House aired for eight seasons, and since 2016, Fuller House has aired with the majority of the original and “next generation” cast members. As seen in the title opening, it depicts the Tanner family residing in one of San Francisco’s iconic Painted Ladies. On Steiner and Hayes streets, near Alamo Square Park, you’ll find these Victorian and Edwardian row houses from the 19th and 20th centuries.

On 2640 Steiner Street in San Francisco, this magnificent Victorian house sits on a large corner property. It was built in 1893, but it rose to prominence after serving as the backdrop for the comedy play Mrs. Doubtfire (1993). Many of the exterior elements and furnishings, such as the entrance and window panes, have since been refurbished and now differ slightly from how they were shown in the film. There are no goat-eaten begonias or farm animals in the front yard, but the Hillard family home is easily identifiable.

The Chinatown in San Francisco, California, concentrated around Grant Avenue and Stockton Street, is the oldest Chinatown in North America and the largest Chinese enclave outside of Asia. It has played a significant role in the history and culture of ethnic Chinese immigration in North America since its founding in 1848. Chinatown is a distinct enclave with its own traditions, dialects, places of worship, social groups, and sense of self. Chinatown in San Francisco is a popular tourist destination, attracting more people each year than the Golden Gate Bridge.

San Francisco’s Chinatown, one of the country’s oldest, served as the inspiration for John Carpenter’s fantasy action film Big Trouble in Little China (1986).

Alamo Square Park is made up of four city blocks at the top of a hill overlooking much of downtown San Francisco, with a number of big and architecturally distinctive homes surrounding it, notably the “Painted Ladies,” a well-known postcard motif. Hayes Street to the south, Steiner Street to the east, Fulton Street to the north, and Scott Street to the west define the park’s boundaries. Alamo Hill was a watering spot on the horseback trail from Mission Dolores to the Presidio in the 1800s, named after the lone cottonwood tree. Mayor James Van Ness constructed “Alamo Square” in 1856, a 12.7-acre park encircling the soaking hole.

The playground at Alamo Square Park is featured in one of the iconic scenes in the classic sci-fi horror film Invasion of the Body Snatchers (1978).

Coit Tower is a 210-foot tower in San Francisco’s Telegraph Hill area that offers panoramic views of the city and bay. The tower, located in Pioneer Park, was built between 1932 and 1933 with funds donated by Lillie Hitchcock Coit to beautify San Francisco.

After the Thin Man, Dr. Dolittle, Sister Act 2, In Boys & Girls, The Enforcer, The Presidio, The Rock, and Innerspace all featured Coit Tower.

The Princess Diaries’ Princess Mia’s Grove High School isn’t actually a school. It is, in fact, the house on the corner of Lyon and Green Streets in Cow Hollow. With its famous great garden and arching stairs on either side, you’ll notice it right away. Because this is a residential residence, we recommend that you don’t go overboard with the re-enactments and limit your trespassing to a bare minimum.

The Grove High School is located near the Presidio, which is famed for its hiking trails, the Walt Disney Family Museum, and the Letterman Digital Arts Centre.