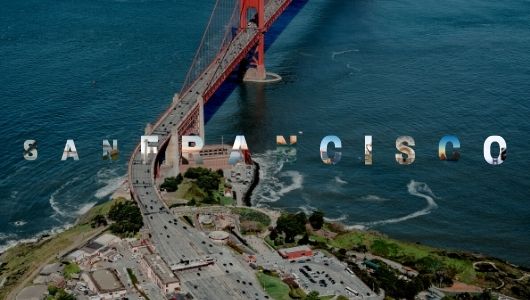 The Golden Gate Bridge is one of the world’s most famous photo locations. As a result, it’s one of San Francisco’s most Instagrammable spots. With so many different viewpoints and locations to shoot it from, we decided that Battery Spencer was our favourite.Battery Spencer is easy to spot after a straightforward drive over the bridge and onto the North Shore. Go early in the morning or late in the evening to avoid the congestion.

The Golden Gate Bridge Cycle Tour, Golden Gate Bay Cruise, and San Francisco Helicopter Tour are just a few of the trips that focus on seeing the bridge from different perspectives.

The 16th Avenue Tiled Steps have 163 steps with colourful, handmade mosaic-tiled art on each of the vertical risers, and they provide a spectacular perspective from the summit. The steps are located at the intersection of Moraga Street and 16th Avenue. You’ll have plenty of opportunity to take Instagram-worthy photos on your way up, including a scene of vividly coloured birds, fish, and animals embellishing the stairwell. Below you’ll find an incredible perspective of the Sunset district. While you’re up there, you might want to stop at Grandview Park, which offers 360-degree views of San Francisco.

The Painted Ladies are a photogenic collection of vividly coloured Victorian mansions that rise steeply up a hill. Between Steiner and Hayes Streets, on the east side of Alamo Square Park, are the residences. The Queen Anne period is represented by the historic houses, which have 2.5 to 3.5 levels, large porches, and numerous balconies. Although you might be able to get a visit of one of the properties, exterior images of the row are magnificent and simple to capture.

The Painted Ladies are most known for their appearance in the opening credits of the American sitcom Full House. They have appeared in over 70 films. The variety of hues and the incline on which the houses are positioned add the right finishing touch. Plan a visit in the early afternoon to observe the ladies in their natural state of beauty, without being suffocated by the sun!

The closest you can go to the Golden Gate Bridge without actually crossing it is Fort Point! Fort Point is a masonry seacoast stronghold and a national historic landmark, so it’s a fascinating location from both a historical and photographic standpoint! You can walk straight under the bridge that used to be the old military fort. It’s very calming to watch the waves crash against the cliffs, and you may sometimes even see surfers in the freezing water!

Walk around the embarcadero area at Fort Point if you’re seeking for another aspect of the Golden Gate Bridge where you can play with perspective from a lower angle. The region of the fortress where it meets the bridge’s architecture is incredibly amazing, and it’s perfect for more abstract images!

The Sutro Baths are the historic ruins of seven indoor saltwater swimming pools that were formerly filled with water from the San Francisco Bay. The Sutro Baths are located near the Cliff House at the intersection of Point Lobos and 48th Avenue. As you stare past Seal Rock towards the huge ocean waters, photos taken from the eroding walls and saltwater pools provide a breathtaking vista. Climbing over the ruins is permitted, however proceed with caution since it might be a risky hike. Following the tunnel beneath the cliff, you’ll arrive at a little beach to relax on.

What was once the world’s largest indoor swimming pool is now a hauntingly beautiful wreck. The Sutro Baths are undoubtedly one of San Francisco’s most Instagrammable locations. These saltwater pools, which were built in 1896 and burned down in 1966, are ideal for photo shoots.

Japantown is a 6-block neighbourhood with lively restaurants, cherry blossom trees, and the Peace Pagoda. Geary Boulevard, which runs from Laguna Street to Fillmore Street, is where you’ll discover Japantown. You’ll note the bright red banners hanging over the streets, as well as the huge range of street meals, such as shabu-shabu, a dish of vegetables and beef cooked in a Japanese hot pot. The Peace Pagoda, a five-tiered concrete stupa, and the bronze lotus Origami Fountains are the most noticeable elements of the neighbourhood.

When the earthquake struck San Francisco in 1906, the Japanese settlers relocated to the Western Addition area. This region eventually grew to include a profusion of cultural stores and eateries, forming what is now known as Japantown. Unique and colourful soft serve can be found all over Japantown for Instagram foodies. Your photographs will include a rainbow of Japanese cultural artefacts as well as other stunning vistas.

Alcatraz, once San Francisco’s most renowned jail, is now one of the city’s most popular tourist destinations! While the interior of Alcatraz isn’t particularly appealing, there’s no disputing that Alcatraz Island is a must-photograph Instagram location in San Francisco from afar. It’s even better if you’re going on a Bay cruise and can take even better photographs, or if you have a good telephoto lens and can get some cool zoom and compression.

The former maximum-security prison on Alcatraz Island is only a 15-minute boat journey from the mainland. Here are some of the most bizarre prison escape stories, some of which are still unresolved. On your way back from the island, take a photo with the lighthouse or some of the stunning sights of the Bay to show your followers that you were able to escape!

The Conservatory of Flowers

The Conservatory of Flowers is a greenhouse and botanical garden in Golden Gate Park, San Francisco, California, that houses a collection of rare and exotic plants. It is the park’s oldest structure, having been built in 1879 and completed in 1880. It was one of the first municipal conservatories in the United States, and it is the country’s oldest municipal wooden conservatory. The Conservatory of Flowers is included on the National Register of Historic Places and the California Register of Historical Places for these distinctions, as well as its connected historical, architectural, and engineering merits.

Colorful flower gardens, statues, ornamental hedges, and gorgeous architecture abound in the Japanese Tea Garden. Hedges pruned into images of Mount Fuji and dragons may be found near the main gate. You won’t want to miss the Pagoda, a 5-story replica of a Buddhist shrine with a small waterfall, bonsai trees, and azaleas that lies in front of a lively Zen garden with a small waterfall, bonsai trees, and azaleas. On Hagiwara Tea Garden Drive at Golden Gate Park, you’ll find the garden. Blooming irises and wisteria, a Drum Bridge, and a Japanese maple that is especially lovely in the autumn colour changes are among the other remarkable characteristics.

The classic marble building, with all of the gold embellishments, is really stunning. This is the ideal location if you’re looking for something a little more formal/classy. The inside is just as lovely! The great staircase with a 307-foot dome and abundant natural light on the upper floors make for an ideal location for a photo session… and, of course, a wedding ceremony! When it comes to design, the San Francisco City Hall is a magnificent gem. Visitors who are fortunate enough may catch a peek of a bridal pair taking photos on the stunning pink marble staircase.

Be advised that the area around City Hall is one of the city’s rougher areas, with a lot of open-air drug usage and other issues. Of course, the people here are mostly harmless, but it may be upsetting for children to see.