Skip to content
Home » Top-Rated Tourist Attraction in the World

Mother Earth and men have collaborated to produce some of the most beautiful spots on the world. Some places simply stand out from the crowd.

There are some places where you may see a picture and instantly recognize the area. Some attractions, on the other hand, are less well-known among first-time visitors or those who have not yet visited more exotic locales. These are frequently the most rewarding places to visit.

Many of these attractions are notable because of what they represent and the locations they represent. In other circumstances, it is the place itself that makes the country worthwhile to visit. These include some of the most well-known UNESCO World Heritage sites.

These are the top destinations to visit in the globe, based on renowned sites, culture, gastronomy, and accessibility.

The Eiffel Tower, which is located in the best spot to visit in France, sells over 7 million tickets each year and is admired from afar by all visitors to Paris.

It contains 1,665 stairs to the summit and elevators to two observation levels and was completed for the 1889 Exposition Universelle after two years of construction.

The tower’s 20,000 lightbulbs are complemented with computer-programmed beacons that can be seen up to 50 miles away as part of an exciting, hourly night spectacle to commemorate the century.

The Eiffel Tower is a must-see for all travelers. It is the icon of Paris and one of the most photographed landmarks on the planet. This single iron building is one of the few places in the world that inspires such a strong desire to explore.

Young travelers embarking on their first road trip, couples seeking a romantic break, artists seeking inspiration, and romantics of all varieties are all drawn to Paris. This is a place where history and culture combine and travelers of all types can discover what they’re looking for.

The Great Wall of China

The Great Wall of China, erected between the 14th and 17th centuries, is a sharp contrast in a world of contemporary cities and towering skyscrapers, but it is a striking spectacle that all visitors to China should see.

A walk up the top of the wall offers a spectacular perspective of the construction stretching off into the horizon. The wall runs for a whopping 21,196 kilometers, passing through some of the world’s most remote locations.

Many tourists visiting China opt for easy-to-organize excursions to the Great Wall from Beijing, which is only a short bus trip away.

Originally known as the Flavian Amphitheatre, it was primarily used as a public entertainment venue. The Colosseum is one of Rome’s most well-known landmarks, and it is where the majority of gladiatorial battles took place.

Actors dressed as gladiators are outside the Colosseum today, where you can snap photos with them. The Colosseum has weathered the test of time and is a tribute to the builders’ brilliance.

The Colosseum is still standing in most of its full splendor today, despite some deterioration. It is recommended that you purchase your tickets in advance to avoid the ticketing line, which can save you a lot of time.

The Grand Canyon of Yellowstone is one of the region’s most recognizable sights, offering various breathtaking vistas as you travel through it. This nearly 40-kilometer-long canyon is Yellowstone’s largest and most well-known.

The breathtaking views of the Lower and Upper falls, as well as the interesting pink and yellow colored rocks, make it extremely popular with visitors. Along the canyon’s length, there are various vistas and sites of interest. Yellowstone is known for its gorgeous colours, and the canyon is no exception. The mineral stains left by water’s activities have given the canyon’s rocks such a pleasing hue of colour that it is certainly a pleasure to see.

The canyon’s geology isn’t totally understood. It was formed over hundreds of thousands of years by erosion, and the geothermal character of the area is still evident, as evidenced by the numerous hot springs found throughout the canyon.

The Incan remains of Machu Picchu, one of the most recently found ruins, continue to amaze historians, archaeologists, and historical enthusiasts alike.

The true function of the site is shrouded in mystery, and historians continue to discuss it to this day. The Temple of the Sun, a hotspot among the ruins, is notable for having windows that are precisely positioned to admit the sun’s rays enter in beautiful patterns.

Aside from the archaeological ruins, the panoramic panorama of Huayna Picchu’s top is a spectacular sight that you will never forget.

Trekking along the majestic Inca trails provides the most authentic experience of Peru’s Incan heritage for adventurers. Machu Picchu is busy all year, but once you’ve seen it for yourself, you can’t help but want to come back for more.

The Acropolis, perched above modern-day Athens, draws you in. As you climb up the same steps that have been walked on since 438 BC – 2,500 years – you will be following in the footsteps of the ancients.

As you travel through the perfectly restored historic structures, the views out over the city are breathtaking. You’ll want to linger at the end of the day to view the sunset from the stairwell near the entryway. In Athens, this is a nightly routine.

Looking up from the city below, the site is also breathtaking. Spend an evening dining on a rooftop patio while taking in the vista of the illuminated hilltop ruins.

The Forbidden City in Beijing, like the Great Wall, is one of China’s most popular tourist destinations. The sprawling building is a stunning example of medieval China, dating from the 14th and 15th centuries.

The palace has housed 24 Ming and Qing Emperors over the ages.

The Palace Museum, located within the city, houses about 340,000 relics showcasing the riches of China’s dynasties. Tiananmen Square is located in front of the Forbidden City.

You might believe you know a lot about historic sites if you’ve been to the Colosseum in Rome or the Acropolis in Athens, both of which were erected over 2,000 years ago.

The Pyramids of Giza, on the other hand, take ancient to a whole new level. These structures date back over 4,500 years. Thousands of years ago, tourists flocked to visit these majestic monuments.

The pyramids, which include the Sphinx and are located just outside of Cairo, are easy to reach and trips are simple to schedule. A camel ride around the structures at sunset is a fantastic experience.

Prague Castle, which sits on a hill across the river from the city’s centre, exudes an imposing presence. The castle is a magnificent collection of structures dating from the ninth to the fourteenth centuries.

Stroll across the elegant 14th-century Charles Bridge, which spans the Vltava River, and up the hill to explore the castle complex’s narrow, tortuous lanes.

The castle is one of the largest in the world, and there is a historical building, church, or open plaza at practically every corner.

Stonehenge is one of those settings where you can’t help but wonder what happened over 4,500 years ago. Historians have long been puzzled by it, and it has piqued the interest of innumerable tourists. Despite the vast number of tourists who visit Stonehenge, the site has a mysterious atmosphere.

Giant stones, some standing, some fallen, are arranged in two roughly circular patterns at the site, with the summer and winter solstices prominently displayed. Visit during one of these times for a genuinely unforgettable experience.

Stonehenge is an easy day excursion from London and may easily be incorporated into any UK itinerary.

The Louvre is the one museum in the world that you must see at least once in your life. Even if you aren’t a museum aficionado, this one is well worth the trip to Paris to visit.

Although most people know it as the site of the world’s most famous artwork, the Mona Lisa, the Louvre has many other attractions.

Countless works by the greatest painters of all time can be found at the museum. However, the structure itself is a landmark. Almost everyone recognises the glass pyramids and the 18th-century structure, which has been featured in numerous films. 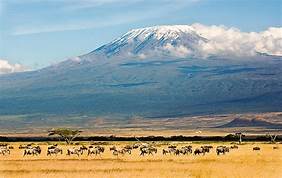 This spectacular mountain – a dormant volcano – is Africa’s tallest peak and one of the continent’s most recognizable icons. Photographs of the wild animals that wander Amboseli National Park and surrounding regions frequently have the snow-capped peak as a backdrop.

You may admire this stunning scene from afar or take a multi-day walk to the summit of Mount Kilimanjaro for spectacular views of the surrounding area and to witness the dawn.

Things to Know Before Visiting the Souks of Marrakech, Morocco

10 Things to Do off the Beaten Track in New Orleans

February 7, 2022April 25, 2022
Cape Verde, often known as Cabo Verde, is an archipelago and island country in the…
Call Now to speak to an agent