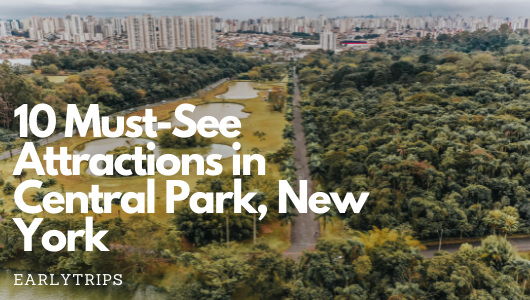 Central Park, 843-acre pocket of wilderness in the heart of Manhattan is one of the city’s most popular attractions and assets, with visitors and locals alike enjoying it all year. Aside from the beautiful scenery, Central Park provides us with countless options to have fun with friends or family, enjoy breathtaking natural scenery, and explore historical landmarks and world-renowned sites. It’s difficult to pick just one side of Central Park to explore because there are so many. Even if we visit the park frequently, it never ceases to surprise us because there is something new to see every day.

Belvedere Castle is a stone castle perched on Vista Rock, with a rooftop lookout that provides a great view of the park and city. Looking north, you can see the Great Lawn and the Delacorte Theater, which hosts free Shakespearean performances every summer with some well-known actors. The Ramble, a wooded region to the south, is a popular tourist destination.

It should be emphasised that the “castle” is actually a small castle built in 1869 to serve as a lookout within the park, rather than a real castle. It soon fell into disrepair, and in the 1980s, it was renovated and reopened. A visitor centre and gift shop are located on the premises. The weather at Central Park is determined by measuring the temperature from the top of the castle.

The Central Park Zoo and the Tisch Children’s Zoo are both run by the Wildlife Conservation Society. Over 130 different species, ranging from massive Polar Bears to the Brazilian black tarantula, can be seen here, just a few yards from 5th Avenue. A stroll around the Zoo’s five acres will take you through a variety of habitats, all of which have been meticulously created to mimic the natural environment of the animals they host. The Zoo is organised into three areas, each of which provides the animals with living quarters that are as close to their natural habitat as possible. These include tropic, temperate, and arctic zones, which are home to anything from geckos to the polar bears, which are extremely popular.

The Zoo is also committed to endangered species conservation, housing rare tamarin monkeys, Wyoming toads, thick-billed parrots, and red pandas. The Central Park Zoo has something for everyone with its seasonal programmes, such as the recent Boo at the Zoo Halloween festival, as well as its different educational programmes. This would most likely explain why the Central Park Zoo is the Greatest Place in Central Park, with over one million visitors per year.

Bethesda Fountain, one of the park’s most well-known attractions, is located directly south of the Lake. The angel of the waters at the top of the statue alludes to the healing abilities conferred upon the Pool of Bethesda in John’s Gospel. It’s the park’s only commissioned statue, and it’s a nod to the Croton water system, which provided fresh water to New York City in the 1800s. A wonderful introduction may be had by walking down the stairs from Bethesda Terrace to the fountain.

Thousands of trees and bushes make up the Conservatory Garden, which is a quiet haven. This six-acre area, known for being the park’s lone formal garden, has a much quieter vibe than the rest of the park, with no cyclists or skateboarders.

The Vanderbilt Gate, a huge wrought iron gate off Fifth Avenue, is the principal entry. The garden is separated into three regions, each with its own distinct style: French, Italian, and English. The bronze fountain Three Dancing Maidens by Walter Schott can be found in the French garden.

The gardens are especially beautiful in the spring, when the fruit trees bloom and the tulips put on a colourful show.

The iconic Central Park Carousel is probably the most popular attraction among pre-teens. It’s easy to picture oneself at a country fair miles outside of New York City as the park spins by and the calliope tootles. The park’s first carousel opened in 1871, and it was pulled by a blind mule and a horse that walked a treadmill in an underground pit. It rapidly became one of the park’s most popular attractions, and it remains so today, with approximately 250,000 riders per year. Commercial ventures were initially frowned upon by park commissioners, but they soon came to see the popular attractions as significant assets. They also saw the city’s not-insignificant fees from the carousel’s operation as a welcome source of much-needed money.

Bow Bridge is among Central Park’s most photographed and filmed locations, and it is well-deserved of its fame. It is not only one of the most beautiful cast iron bridges in the world, but it also gives some of the most breathtaking views of the park around it, stretching sixty feet over the lake from Cherry Hill to the Ramble. Bow Bridge, which was completed in 1862, was constructed of cast iron rather than stone, which was used for practically all of the park’s other archways. It is one of the finest examples of the enchantment that arose from the united vision of Calvert Vaux and Jacob Wrey Mould, from its beautiful curves to the subtle embellishments. It has a subtle yet dramatic style that serves as a seamless transition between the meticulously built Cherry Hill and the chaotic disarray of the Ramble.

Tall American elms arch over this pedestrian walkway known as the Mall, which stretches from 66th to 72nd Streets and is lined on both sides by benches. Because Central Park has been used as a setting in numerous films, it is what you might anticipate it to look like before visiting it. During the summer, one stretch of the Mall is a favourite spot for roller skaters and other entertainers to show off their skills due to its central location and flat environment.

Loeb Boathouse on The Lake

The picturesque Loeb Boathouse, located on The Lake’s far eastern bank, is a restaurant featuring an interior dining room and an outdoor seating area directly on the water’s edge. Weddings and other formal gatherings are frequently held here because of the lovely setting.

On a warm afternoon, you can sit here and sip coffee or eat a meal while watching people paddle boats on the normally tranquil sea. You may rent a boat and go for a paddle around the lake if you’re seeking for a little more activity.

The Jacqueline Onassis Central Park Reservoir, located between 86th and 96th Streets in the heart of the park, is arguably the most valuable waterfront real estate on the globe. It’s now officially known as the Jacqueline Kennedy Onassis Reservoir, and it takes up one-eighth of the park’s total area. The 40-foot-deep 106-acre body of water holds nearly a billion gallons of water. Since the opening of the new water tunnel in 1991, it has been decommissioned as an operational component of the city’s fresh water supply. The 1.58-mile running track that surrounds it is probably its most well-known feature. The Reservoir is also the topic of a heated discussion as numerous potential proposals for its future are being examined, including fishing piers, a marina, ball fields, restaurants, and beaches. Hopefully, the argument will continue indefinitely, with the current configuration remaining unchanged.

Wollman Rink opened in 1949 and has been a huge success since then, with over 300,000 skaters skating across the ice in its inaugural year. Ice skating in Central Park is unquestionably one of the most stunning wintertime hobbies. Unlike the cramped confines of the Rockefeller Center rink, Wollman Rink allows you to glimpse the stars. As you glide (gracefully or not so gracefully) over the ice, feel the chilly tingling of New York’s crisp winter air, listen to the music, and take in the spectacular surroundings. The Victorian Gardens amusement park, a lovely depiction of a small village carnival with rides and activities for the whole family, takes over the rink in the spring and summer.