Atlanta is nestled on the foothills of the Appalachian Mountains, with hills and the densest urban tree cover in the United States. Some of Atlanta’s most well-known attractions are reasonably priced. Atlanta has gained the nickname “the city in a forest” because of its numerous free public parks and green areas. Some of Atlanta’s most popular streets pass through tranquil city parks and bustling urban areas. Stroll through scenic roads to find a selection of local boutiques and tiny cafés, or you can travel to the city center for stunning architecture and plenty of nightlife options for a memorable trip in Atlanta.

Many of the city’s attractions are accessible via the MARTA public transportation system, which provides light rail, bus, and subway services for less expensive transportation options. Now, let’s take a look at Atlanta’s 10 Most Popular Streets.

The Jackson Street Bridge, which offers one of the city’s most magnificent skyline views, is a popular site for anyone looking for a fantastic photo. The iconic photo from the first season of “The Walking Dead” is taken from the Jackson Street Bridge, which offers a view of Downtown. And therefore, the bridge attracts fans of AMC’s “The Walking Dead,” who remember the location as one of the sci-fi show’s most memorable scenes.

It’s close by, and there’s hardly much traffic. And on top of that, it costs nothing to stand on the bridge between Cain Street NE and Highland Avenue NE.

If you have the time, visit the city at three different times of the day (sunrise, lunchtime, and sunset) to capture the city in various light conditions.

Auburn Avenue passes right through the historic Sweet Auburn area of Atlanta. Auburn Avenue is home to numerous magnificent murals and historic buildings, as well as notable museums and memorials.

Public artworks, such as the Lewis mural, are crucial in bringing increased interest to the street, which is designated as a National Historic Landmark, as part of Sweet Auburn Works’ objective to rehabilitate the historic community.

Don’t miss the yearly SpringFest in mid-May or the Sweet Auburn Heritage Festival on the first weekend in October if you love festivals. Both events feature live music, delicious southern cuisine, and a variety of local art for sale.

Peachtree Street is one of the well-known streets thanks to its convenient location, fantastic shopping, and magnificent architecture. It begins at Five Points in downtown Atlanta and proceeds north through Midtown until changing its name to Peachtree Road at Deering Road a few blocks after entering Buckhead. The street is lined with much of the city’s historic and notable architecture, and It is regularly utilized for both annual and one-time parades celebrating events such as the Coca-Cola 100th Anniversary in 1986 and the Atlanta Braves World Series win in 1995.

There are several significant landmarks and important structures along Peachtree Street, in addition to a variety of luxury shops and fine-dining restaurants. The Fox Theater, Georgia-Pacific Tower, Bank of America Plaza (the city’s highest skyscraper), and the High Museum of Art are all worth seeing.

You can get a 360-degree view of the jaw-dropping Midtown Atlanta cityscape from Atlanta’s own Central Park.

To mention a few features, this large city park has walking trails, a running track, a playground, soccer fields, a swimming pool, and a dog park. It attracts a diverse group of people looking for a fun, cost-free opportunity to spend time outside during daylight hours throughout the year.

Spend the afternoon jogging along the lake or simply lounging on a blanket in the sun. Food trucks are common, especially in the summer, so have some cash on hand just in case. Due to its central location and ample green area, it is also a popular venue for a variety of festivals and events held throughout the year.

At the iconic tunnel noted for its ever-changing graffiti and full-bodied flare, expect to see someone shooting video or photographs. The Cabbagetown and Inman Park areas are linked by a drive-through underpass on Krog Street that also has two pedestrian pathways.

It was originally a portal to the ‘other side of the tracks,’ but now it connects communities that were once economically, racially, and politically diverse. The murals in the tunnel now address all of these issues in an attempt to bring us together and close the divide.

Anything goes here, from inspiring words to exhibitions by both renowned street artists and amateur taggers, which is part of the photogenic fun.

Ponce de Leon Avenue, sometimes known as Ponce, connects Atlanta, Decatur, Clarkston, and Stone Mountain in Georgia. It is a 16-mile thoroughfare that goes through some of Atlanta’s most fashionable neighborhoods. It was named after Ponce de Leon Springs, which was named after explorer Juan Ponce de León. However, it is not pronounced as it is in Spanish.

Ponce De Leon Avenue, which is lined with historic homes, art galleries, tattoo parlors, trendy eateries, and distinctive bars, is a terrific area to take in the city’s lively culture.

Euclid Avenue is a bustling thoroughfare in Atlanta’s northeast. Euclid Avenue, with its numerous record stores and cafés, is the ideal destination for anyone seeking a hip, local experience in the city.

Browse interesting collections of vintage records at Criminal Records and Moods Music, or grab a cup of coffee at Java Lords and Village Coffee House, which both provide wonderful drinks and a laid-back atmosphere.

Take a walk north towards North Avenue, where you’ll find Walton Spring Park if you want to explore on foot. Beautiful walking pathways and a butterfly garden are among the attractions.

In the northern area of downtown Atlanta, 10th Street is a major street that runs east to west. On the western side of the Boulevard, there are a number of bars and restaurants frequented by Georgia Institute of Technology students.

A few steps east will put you in the center of Manhattan’s Midtown district, which is a bustling commercial district with fine-dining restaurants like The Consulate and Empire State South. Piedmont Park, with the historic Park Tavern at its entrance, is located at the very eastern edge of 10th Street.

Rainbow crosswalks are being installed in many locations around the world as a symbol of solidarity for LGBTQ people. Atlanta was one of the first cities to build a rainbow crosswalk, which was temporarily painted in 2015 during Atlanta Pride Week and then permanently installed in 2017. Selfies and couples go to the paved multicolored crossings at the intersection of 10th Street and Piedmont Avenue, which have become an Instagram classic.

Decatur Street is known for being one of Atlanta’s original seven streets and for being home to the city’s first theater. This boulevard, which runs east to west, is currently lined with theaters and clubs, particularly near the famed Oakland Cemetery. It’s also one of the main thoroughfares on Georgia State University’s campus.

Check out The Village Theater, a comedy club on the corner of Decatur and Hillard, if you’re searching for a good chuckle. Local comedians and improv acts are well-known at this intimate performing venue. If you want to walk around, visit the university to see the library, sports arena, and theater, among other notable structures.

Centennial Olympic Park, World of Coca-Cola, the Georgia Aquarium, and the Children’s Museum of Atlanta are all located on Baker Street, making it one of the city’s most popular tourist sites. Spend a few hours at the Center for Civil and Human Rights, a massive museum dedicated to the American civil rights struggle, and then head to the Georgia Aquarium, which is home to over 100,000 species, for a full day of exploration. Finish your day by visiting the World of Coca-Cola for some unique insight into the company’s history and global fame. 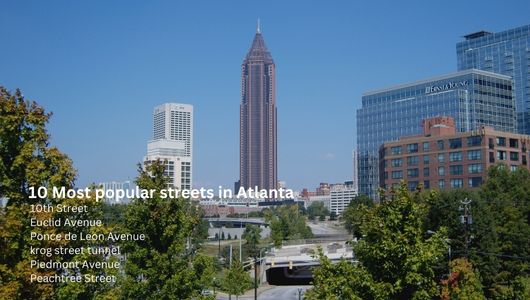