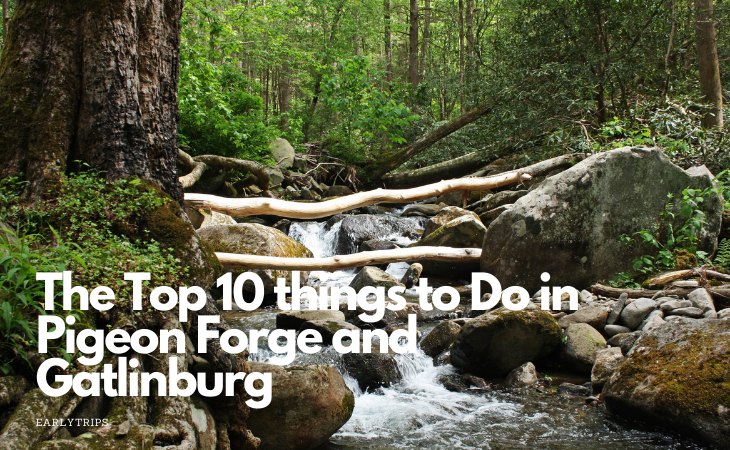 Gatlinburg is a mountain tourist town in the United States’ Sevier County. It is a popular vacation destination since it is situated on the outskirts of Great Smoky Mountains National Park. Pigeon Forge is largely a tourist attraction for enthusiasts of Southern culture and country music. Dollywood and Dollywood’s Splash Country, as well as several souvenir stores, outlet malls, amusement rides, and musical theatres, are among the city’s attractions. So, without further ado, here are the top 10 things to do in Gatlinburg and Pigeon Forge.

Hiking on the park’s 900 kilometres of trails is the most popular pastime. Under the cover of mixed deciduous and conifer trees, walk alongside spring-fed waterways. Mountain magnolias, mountain laurels, wild azaleas, orchids, and rhododendrons are among the park’s more than 1,400 flowering plant species.

Gatlinburg’s Anakeesta is an airborne adventure park. Anakeesta’s summit can only be reached by chairlift or gondola. You’ll have a lot of fun once you’ve reached the top! You can sprint down dual ziplines, walk 30 feet in the air on the tree canopy walk, or simply eat some delicious food! Regardless of your age, Anakeesta has something for everyone to enjoy, whether it’s exciting or peaceful.

Dollywood is one of the country’s best theme parks, and it’s easy to see why! Dollywood is a one-of-a-kind experience with thrilling rides, wonderful food, and unique shops. This Pigeon Forge attraction will delight the entire family. You’ll have a terrific time at the theme park, whether you’re seeing a show, riding a roller coaster, or eating Southern-style cuisine. If you’re visiting during the summer, don’t miss Dollywood’s Splash Country, where you can cool down on the water attractions or swim in the wave pool!

Dolly Parton’s Stampede, one of the most well-known Pigeon Forge attractions, is a must-see for anybody visiting the area. For a fun and unforgettable evening, this show combines a magnificent array of special effects, abilities, horsemanship, and more. Watch as one of the best shows in the Great Smoky Mountains National Park takes place. Support your favourite team while enjoying a patriotic display, cutting-edge technology, comedy, musical performances, and more. And then there’s a fantastic lunch to cap it all off. The stampede Christmas show is ideal for getting into the holiday spirit at your Smoky Mountains Christmas celebration.

The Ripley’s Aquarium of the Smokies

Over 2,000 animals call the Ripley’s Aquarium of the Smokies home! Sharks, a marine turtle, penguins, and much more may be found inside! There are various exhibits where you can engage with animals and even touch them! Other interactive exhibits throughout the aquarium make learning enjoyable! Everyone will find something intriguing and cool to see on the three floors of things to see!

The highest peak in Tennessee and the Great Smoky Mountains National Park is Clingmans Dome. The Clingmans Dome Observation Tower, at 6,643 feet, is a one-hour drive from downtown. On clear days, the greatest times to witness views that reach 100 miles over the misty mountains are at sunrise and sunset.

The observation tower stands 45 feet over Old Smoky Mountain to provide a panoramic view of Tennessee and its surrounding states of Alabama, Georgia, Kentucky, North Carolina, South Carolina, and Virginia. On your way up, you’ll pass via the world-famous Appalachian Trail, which runs from Georgia to Maine. The tower has interpretive signage that tells you about the peaks and cities below, including Gatlinburg.

Gatlinburg SkyLift Park is a must-see attraction for anybody visiting Gatlinburg. You’ll reach the summit of the mountain by the iconic chairlift to see amazing mountain vistas unlike any other. The SkyDeck offers spectacular photo opportunities as well as a relaxing environment with views of the Smokies. Walk across the Gatlinburg SkyBridge, which has glass panels in the centre that gaze straight down into the forest below, to test your daring. At the SkyLift Park, everyone will have a great time!

The Hollywood Star Cars Museum is a fascinating diversion for visitors to the Gatlinburg Strip, both young and elderly. The collection includes vehicles from Gone in 60 Seconds, The Fast and the Furious, and Days of Thunder, and comprises over 45 cars used in Hollywood films. The original Batmobile from the 1960s TV show Batman (as well as a Batmobile from 1992’s Batman Returns) and Herbie from the Disney movie franchise of the same name are two more well-known favourites.

Michael Jackson, Elvis Presley, James Dean, and local legend Dolly Parton all owned or drove vehicles on display. If you don’t have time to see the entire museum, stand on the sidewalk and appreciate the fins and chrome.

The Titanic Museum is a two-story museum that is designed to look like the RMS Titanic. It first debuted on April 8, 2010 in Pigeon Forge, Tennessee. It’s a half-scale replica of the original ship. In twenty halls, the museum houses 400 pre-discovery items. It is the world’s largest permanent Titanic museum.

Guests are handed a passenger boarding ticket as they enter. This ticket bears the name of a Titanic passenger as well as the class in which they travelled. Guests will learn about the personal tales of a number of passengers. They’ll find out whether their booked passenger survived in the Titanic Memorial Room.

The Hatfield and McCoy Dinner Show

The Hatfield and McCoy Dinner Show in the Smokies put the infamous Hatfield and McCoy conflict front and center! Come see the two families play pranks on one other and have a good time. Furthermore, while watching the performance, you’ll be eating on delectable Southern cuisine. One of the must-see things in Gatlinburg and Pigeon Forge is the Hatfield & McCoy Dinner Feud Show!